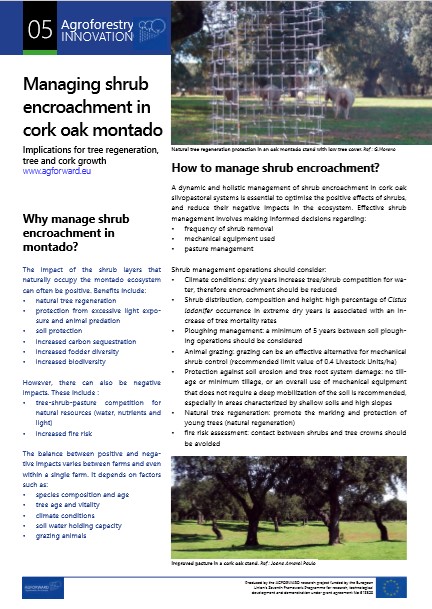 The impact of the shrub layers that naturally occupy the montado ecosystem can often be positive. Benefits include:

Willow rods for arts and crafts and water restoration - operating concept of WeidenArt, Freising
The Freitag's have traditionally been dealing with agroforestry systems for a long time, even though they were not previously referred to as such. The company can look back on three generations of experience in willow cultivation.

Faiderbia albida coming into leaf in a maize field near Mazabuka

It has long been obvious that a truly regenerative agricultural system is one that minimises its dependence on external inputs like inorganic fertilisers, phytosanitary products and diesel. Regenerative farmers focus on understanding, applying and exploiting the resources provided by every farm’s local ecology

The study of natural ecosystems reveals that plants and animals never operate in isolation. Thriving ecosystems always include a multiplicity of producers, degraders and consumers, feeding off and nourishing each other in a never-ending dance whose only external inputs are rain, sunlight and the resources bacteria and fungi liberate from the soil’s underlying bedrock.

But making it work in real life can be a challenge for many farmers. They have to worry not only about the functioning of their agroecosystems, but also about feeding their families, meeting market demands, the unreliability of weather and dealing with their neighbours - in short, they must nurture their livelihoods above all else.

And they must do so in cognitive environments filled with conflicting information. For most farmers, access to agricultural knowledge is mediated by actors that have ulterior agendas. Agricultural supply stores are not only wonderful places to meet other farmers and discuss the challenges of the day, but are businesses that make their living from convincing as many farmers as possible to buy as much of as many inputs as possible. Agricultural advisors often support that agenda: the agricultural courses they took at university typically focussed on input-intensive mechanised agriculture, and were often subsidised by the agricultural input industry.

Despite these headwinds, the world is sprinkled with extraordinary farmers achieving amazing results by applying agroecological principles. They combine the growing of annual crops, perennials such as trees and livestock, in ways that deliver higher productivity, better resilience and much lower negative externalities. It was to see one of the world’s most masterful such farmers that I recently visited Zambia. Sebastian Scott, the son of Zambia's vice-president Guy Scott, has devoted his career to the development of extraordinarily productive smallholder farming systems that require no inputs beyond sunlight, rain and the labour of human muscles and animal feet and snouts.

His playground is his farm near Kafue, where over years of combining crops, legumes, trees and livestock he is achieving levels of productivity that are so extraordinarily high that most commercial farmers simply cannot believe his figures. In the most recent cropping season, he achieved maize yields of 16 tonnes per hectare, despite the presence of FAW, or Fall Army Worm, a feared pest devastating maize across southern Africa. This easily surpasses the return of the most intensive large farms in the American midwest or in Brazil's Cerrado, and is a full order of magnitude more than most Zambian smallholders typically achieve with the help of subsidised fertiliser.

Mr. Scott achieves these results, which are being monitored by CIMMYT scientists, with intricate multi- and cover-cropping, the integration of several tree species, and the management, using mobile fences, of chickens and pigs as weed / pest controllers and legged fertiliser factories. He does not use machinery, inorganic fertilisers or pesticides. Every tool he uses is commonly available to Zambian smallholders, and the farm always pays for its own investments. “It is astonishing how quiickly the farming system begins to deliver once you intercrop cereals with legumes, practice crop rotations, and integrate trees and animals,” Mr. Scott said. But there are pitfalls: “If you don't pay attention to your carbon nitrogen ratios, even the best cow manure can go to waste”. Getting it right may take practice, but the first step is easy: "make sure you have enough green matter in your mulch".

Communal heard holistically grazed in a miombo forest at Mpanshya

Zambia is also a global innovator in the use of grazing to pursue livelihood and environmental objectives. In these systems, known as holistic grazing or adaptive multi-paddock grazing, the animals are mob-grazed at very high densities for very short periods of time - often no more than a few hours - before being moved to the next paddock. These are tiny, very numerous, and mobile: the animals are kept bunched up (by herders, dogs or moveable electric fences). Their impact is massive: the palatable grasses and legumes are grazed; anything unpalatable, along with the falling seeds of palatable plants, is trampled into mulch covering the soil, and the whole is fertilised by manure and urine. Once impacted, the land is allowed to rest, often for a full season.

This treatment leads to a rekindling of ecosystem functions within a single season: there is a lot more plant growth, and the amount of bare ground between grasses and legumes reduces dramatically. This helps water percolation, slows down erosion - and, of course, makes more fodder available to livestock and wildlife alike. And, when the animals are herded onto crop fields for the night, they beneficially impact them, too.

But while it is comparatively easy to make this kind of management work when a single manager controls hundreds of hectares and animals, it is a lot harder when individuals only own a few animals and farm on small plots. And yet it is in those circumstances - in environments of smallholder farms and community land ownership - that the promise of this technique as an ecosystem restoration tool is most tantalising. Across the world’s drylands, desertification is proceeding apace, often as a result of bad grazing management. Already, according to the FAO, about a third of the agriculturally useful land area around the world is degraded.

And it is precisely in the communal deployment of these systems that Zambia has innovated. When many owners combine their animals into a communal herd, as happened at Mpanshya near Rufunsa, on the Kafue River floodplain, and in over a dozen other communities across southern and western Zambia, miracles can happen. The grass grows fat and plentiful. In silvopastoral systems, where cattle are mob between trees, mushrooms appear in quantities and trees become heavy with fruit. Animal biodiversity - even large game! - returns to the landscape to exploit that extra plant biomass. Zoonoses disappear as vectors such as ticks are starved of hosts, since livestock does not spend more than a few hours a year on any given spot of land.

For Rolf Shenton, the former Zambian MP who is the driving force behind these systems in the country, the magic sauce is embodied in one word: trust. “It really takes a lot of work for people to trust each other with their cows, which are their most precious capital asset,” Mr. Shenton said. “People are usually so fearful of theft that they keep their animals close to the homestead during the day, even as grass is plentiful elsewhere”.

This has huge costs: the cows are not feeding properly, stay thin, and need frequent dipping against the heavy disease load their sedentary lives expose them to. Their manure is wasted, and a lot of grass remains ungrazed, becoming a risk for dry season fires. Every household has to allocate the labour of one child or youth to watch over one or two animals - labour that could be deployed more productively, whether in schooling, studying or other work.

“Trust comes from a lot of community work. When it’s finally there, the results are almost miraculous,” Ireen Chikatula-Furrer, who works with Mr Shenton at Mpanshya, pointed out. “People could soon see that their cows were doing much better, growing fatter and being exposed to less disease,” she said. “For many, the penny dropped once they saw the impact on their crops of the night kraaling of the communal herd on their fields”.

Cows enjoying the first graze of a fresh paddock, a few minutes after being let in, at Mpanshya

Your correspondent had tears in his eyes when he saw the bounty this approach delivers after driving hundreds of kilometres past decidedly struggling farms. At Mpanshya, the forest was alive with green plants, birdsong and wildlife tracks, While many of the villager’s fields boasted deep green maize with fat cobs . At Kafue, a plain that until two years ago was mostly bereft of any life, a sea of green grasses stretched as far as the eye could see. In both places, the recipe was almost absurdly simple: no burning and mob grazing (in Mpanshya, the intercropping system developed by Mr Scott was used on some of the fields).

Both of these approaches deliver what farmers are most interested in: more money, more regularly, with more resilience against droughts, storms, pests and diseases. And in both of these systems, Zambia is a pioneer.

Some may say that these farming systems are too complicated for the average farmer to adopt. It is indeed true that they require something missing in many farming households: a curiosity about plants, soils and animals; a willingness to experiment with intercropping, crop rotations and the deployment of green and animal manures; and the willingness to entrust one’s animals to a communal management system.

This is agroecology, a mode of farming that delivers without requiring any inputs. Their costs, whether incurred by the farmer or by the state through subsidies, disappears. Yet it produces more, with greater resilience. These effects are directly visible in the bottom line: the farmers, the communities, and the nation make more money.

All of this will be burned at the start of the dry season. The grasses have adapted: the ones you see here are fire dependent and unpalatable for wildlife or livestock

The world needs these positive results more than ever.

input-intensive food systems are being battered by strong geopolitical headwinds. With Russia's invasion of Ukraine and the global sanctions that followed, two massive suppliers of everything from diesel through fertilizer to wheat, maize, feed and vegetable oils have been taken off the global markets. As of this writing, global fertiliser prices have already doubled, wheat and maize prices have risen by over 50%, and the rationing of bread has started in countries like Lebanon or Egypt. According to the FAO and the world food programme, the world may soon be facing famine-like conditions of biblical proportions across dozens of poorer countries.

Zambia, with its reliance on subsidised fertilizer, will not escape unscathed.

But unlike many countries, Zambia has massive advantages. It is a large country blessed with good soils and decent weather, whose population density is not yet critically high. With the right changes in management, Zambia could not only ensure its own food security but become a large agricultural exporter to its less-blessed neighbours as well.

It is striking that the two most transformative agricultural innovations of the modern age, agroforestry and holistic grazing management, are now spreading around the world from their roots in Africa.

The continent is not only the one where our species originated, but it is also turning out to be the one that may save us from the extraordinary damage that petrochemical agriculture has wrought.